We are here to laugh at the odds and live our lives so well that death will tremble when it takes us.—Charles Bukowski

It seems like just yesterday that we said goodbye to our 2016 Mercedes Sprinter van tucked into friends’ driveway in WY. In reality, it is two months and we miss its smooth drive, large clear windows and, of course, THE BED. It is time to reconnect and drive it to Alaska, where its maiden voyage will be completed.

In an unexpected twist to our unconventional life, Jim O’Neill bought a motorcycle and is riding from Chico, CA to Sheridan, WY where I will meet him. A lifetime lover of motorcycles, and BMW’s in particular, Jim’s sold his motorcycle when he returned from his cancer treatment. It was too big and he was too weak. He planned to buy a new motorcycle, a smaller BMW, next year, but found a good used one, a BMWR1150RS, in CA. Side note: Jim seems to need Internet help, but managed to locate the motorcycle on Craig’s List AS WELL AS a trailer for it in Billings, CO. Ironically, the man in CO had to sell his motorcycle due to neuropathy from his colon cancer treatment. A friend, a longtime rice farmer in Chico, agreed to check it out and then brought it back to Chico and stored it for Jim.

Like any adventure, planning and anticipation is great fun. Jim gathered his gear, helmet, boots, motorcycle suit and gloves and packed them in an expendable duffle. I dropped him at the airport earlier this week for a redeye to Sacramento, CA where is friend picked him up. He enjoyed flying around in a SuperCub and playing farmer for a couple of days.

Earlier we said goodbye (but not adieu) to DustyKitty, who is residing at Daniels Lake in cat loving hands. We both miss her so much, not to mention each other.

The heat wave expected in the NW is of concern, too. Yesterday, Jim rode his motorcycle for the first time. He was concerned, which meant I was even MORE concerned. The chemotherapy-induced neuropathy in his feet hindered his ability to ride the bike. We talked about ending the trip. He decided he would try wearing his regular boots and would start off early this morning. He agreed to turn back if the condition of his feet became a safety problem. I know this is an important trip for Jim. B.C. (before cancer) he was the Energizer Bunny going from morning to dusk with the agility and dexterity of a trapeze artist. That changed with the cancer treatment. Not only does the foot neuropathy affect his balance and his walking, he still suffers severe fatigue. Ironically, with my 2 surgeries, I have the same problems!

He started off early this morning, with an aim of 400 miles each day. He stopped for gas in Alturas and called me. Soon he called again. The motorcycle had fallen over. He was a little shaky. The seat is a bit high for him and the neuropathy impeded his response. He was grateful that people nearby helped him to right the bike. He had been careful, due to the gravel, but it got away from him.

“Scrapes and scratches?” I asked.

“Huh?, he said. “It’s the bike that has the wounds, not me. Luckily they are cosmetic.”

He called from Burns, OR where he is spending the night. Exhausted. Heading to bed early, to rise early to beat the heat. He is not taking the Interstates and has found little traffic. Proud of his 408 miles! 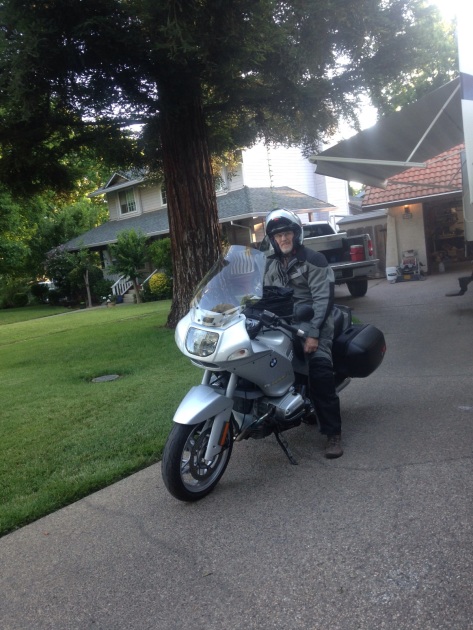