Jim’s sweater made great gains in Sheridan WY as we spent several days with Alaska expats Greg and Debbie. We are still working on the back of the sweater, but several inches of beautiful soft sweater emerged during the laughter filled visit. Debbie is an expert knitter and was happy to correct my many knitting mishaps as well as whipping out several rows herself. My knitting confidence grew as she showed me some techniques in her best gentle teacher  way. Sometimes we both knitted and talked—something that didn’t work well always for me. So sometimes I knitted and sometimes we talked!!

The first part of the trip included other guests that the Marinos take in stride. “Rocket shoes” Debbie left me in the dust quickly fixing fabulous meals for 7 visitors including ANMC oncologist Matt and his 14 year old son Jack, who shot his first deer, as well as their long time friend, retired teacher and pilot 80 year old John. I never seem to have time to visit Matt in Anchorage so I was delighted to see him for a few days. Matt, Jack, Greg and Jim, while out hunting, became involved in a rather bizarre incident involving a deer, a competitive game warden and a gun-waving rancher. But that’s another story.

Soon there were four of us plus Maggie “the chocolatey lab”.

In addition to giving Jim’s cancer check up a green light,

Greg took him flying on a stunning day, landing in Coalstrip, MT where a fridge held 50 cent sodas and the offer of a retired police car to drive around for guest pilots. 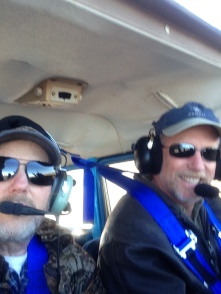 Dr. Marino was responsible for Jim getting cancer care before he died. when I  had texted  him a picture of his blood results t in WY.  His local doctor was dithering. He urged us to quickly head to Anchorage.  After 2  days in Anchorage, it was 51/2 long months in Seattle. So there is a very special relationship between Jim and Greg

The next day Gr

eg and Jim went hunting, with Jim shooting his first white tail deer while Greg shot a mule deer. As is the Alaska custom, they both thanked their deer for “giving itself” to them.

It was beautiful weather and wonderful company. We stayed an extra few days to help Greg and Debbie celebrate their 40th wedding anniversary with a great dinner

and wonderful conversation. Sheridan friends Mark and Tibby came along with expat Alaskans, Chris and Dave. The best part was that Tibby was so moved by the story of Jim’s sweater, she knitted a few rows as we talked. Chris doesn’t knit but did bring her favorite mitts that needed a little knitting repair work.

The love and warmth in Jim’s sweater increases along with the inches. I can feel it.  It’s getting softer and warmer every day.