“Used to be’s don’t count anymore. They just lie on the floor til you sweep them away.”

Today I celebrate a victory. Inconsequential for the world, uplifting for me.

I started running in the early 1970’s and it quickly became my “cup of coffee and cigarette”, my solace, problem-solving and “calmer down”. Two surgeries on one knee over two years slowed me down, but I was ever so grateful when I could return to running and carefully planned my runs. I ran mostly alone, just for me. An early riser, out the door for a run, back for a shower and at work before 8am with a big smile on my face to the groans of colleagues who weren’t so inclined.

Moving to Alaska’s remote community, Dillingham, made running very challenging, little pavement, no shoulders and…….bears. It wasn’t until “The Women who Run with Salmon” started training together for the “Klondike Relay” that I started running again and my 13 mile run that started at 11:30pm was glorious with the sky filled with shooting stars and the Milky Way. For many reasons, especially health issues my running commitment fell off until I have settled in Nikiski.

I delayed starting an exercise well-being routine, including walking, meditation back/spine Qi Jong. Recently I started meditating again, but I didn’t make walking a priority and was too tired in the afternoon.

But today that changed, Determined to make it a priority I got ready this morning. I did a few stretches, noting thatmy right leg did not respond to calf stretches, but my left one did so I know I was doing them. I wore boots for support and the muddy road. Off I went, even timing my one mile planned walk. Along the way, my right leg started whining and complaining, but I did not listen and insisted that it come along. By the end my toes wouldn’t bend correctly in rebellion but I made it!! Funny, a mile in 23 minutes feels just as grand as a 13 mile run in the middle of the night!! A shower and grateful meditation followed. Who knows maybe sometime, I might even be able to slowly jog that mile!!

Leaving Seattle, we headed into Oregon for a few days with my daughter, Jennifer, (a knitter) and Andy in Portland, and friends Elise (not a knitter, but promised her mother) and Chuck in Salem.

I love Portland, especially Jennifer’s neighborhood,– the Alberta Arts district, with its many small shops close together on both sides of the street, and just as many food places. I looked forward to walking to the yarn shop for knitting accouterments.

Finally, we turned to the sweater. “It should be called Jim’s Sweater by Tom Sawyer, “ offered Jennifer. We chuckled. While the three Seattle knitters had magnificently knitted the first rows of the sweater back, I had somehow managed to do my first two rows of ribbing backwards. I attempted to undo the two rows, but Jennifer said back knitting is hard and we decided to leave them. After all, imperfections are a sign of handwork. 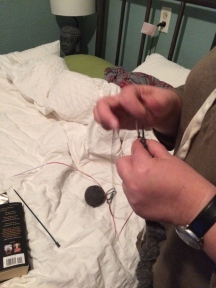 Jennifer began to switch the sweater onto metal circular needles that we bought in the yarn shop. She then deftly knitted one row. “More,?” I asked. “No,” she replied. Next she tackled the yarn “blanket” I had started the previous year correcting problem spots. An occasional sigh escaped her lips—a peculiar sound that daughters do occasionally and only mothers can hear.

We left Portland to spend two days on the coast with an overnight visit with Alaska expats Elise and Chuck. We met for dinner at the Wild Pear in downtown Salem and then to their house. Chuck is a retired calculus teacher, who now tutors students with plenty of time for his running passion. Elise, a recovering social worker is a fulltime expert bead glass blower including small, beautiful birds and animals. I treasure several pieces of her jewelry, www.koibeads.com

Elise, blessed with an incredible quick wit, is a longtime friend and support through good times and bad. At one point she decided to contact God for a guardian angel replacement as she claimed my angel was not doing her job. It was a short, but rich, warm visit. Alas, there was no time to visit her mother, the knitter. 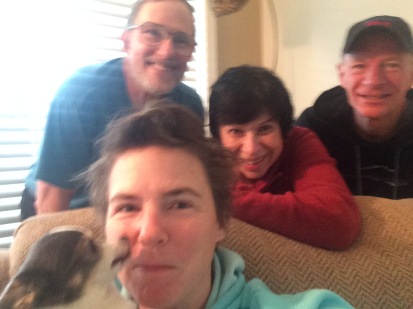 I had one more NW knitter hope. Cheri, expat Alaskan now living in western Washington was a fellow Canadian born on Salt Spring Island off of Vancouver Island. The island is home to many, many artisans. And while I didn’t ask, I just knew Cheri could knit. Alas, Cheri was on a work project in Alaska and wouldn’t return for two days after we were in the area. Tom Sawyer needs to step it up.

We planned a rendezvous with Donna and Chris who had committed to knitting a few rows. Donna is an Anchorage colleague who recently built a home on the Kenai Peninsula not too far from Nikiski. We had been crisscrossing our vagabond paths and hadn’t connected. Now it looked good! We were both headed to Lewiston MT where we planned to meet at Costco’s. Alas, they were delayed and we were early so we will try again in AZ in a couple of months.

Now up to me, I finished the eclectic ribbed rows and moved on to the back. Hmmm I seemed to have picked up an extra 15 stitches and must remedy that. Luckily we are on our way to Sheridan WY where we will stay with expert and fast knitter Deb and former colleague/friend Greg. 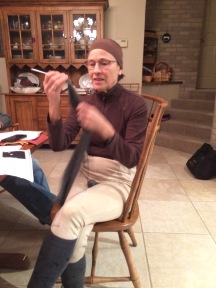 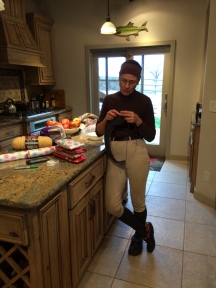 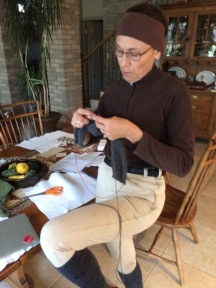 I am not disappointed. Deb loves the yarn and says so over and over again. “This yarn has a good hand,” she said knitting away (: She described the upcoming pieces and the best way to knit them. If all else fails and I run out of expert knitters, she told me to Skype her. Phewwwww.

Not sure of our next move after Jim sees Dr. Marino for his 6 month oncology checkup next week. However, Siohban, an expat Alaskan living in South Dakota has offered a few rows while Joyce and Jim, fellow nomadic wanderers are headed back to AK before we can get Joyce’s rows.

This is a beautiful, but slow project. Perhaps I should send out a roving body part or two. Anyone interested in an arm to knit a bit and send around? Or a pocket?

Ninety year old Jim shuffled into the room with his hands shoved into the pockets of his favorite sweater, a grey cardigan. Deep in thought he was obviously thinking about a design problem with his latest project. He headed for his favorite chair, a big overstuffed red and green lodge chair that looked like it had been rescued from the Salvation Army. 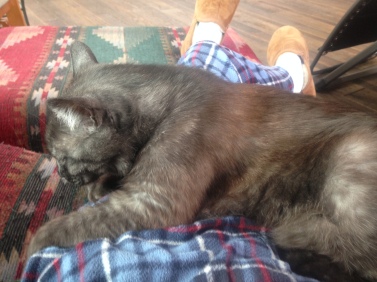 From a distance, most people wondered why he wore the sweater so often and seemed to be happier than normal when wearing it. Sure it was warm and light but it was a little misshapen and seemed to have slightly different patterns. One arm was a little longer than the other, but Jim just rolled it up a bit. There were pulls in the yarn in some places. It looked like a cat had kneaded the sweater before settling onto Jim’s lap. It almost looked like many people knitted the sweater.

Sure it was ratty, but up close it emanated warmth, happiness, kindness and love. How could this be? After all it was just a bunch of yarn…..