Gaspe is located after crossing the top of the Peninsula. It fascinatse me as this is the place I send my Canadian passport application. It seemed so far away and so remote. I found the building and could barely stop myself from running inside to show them the passport they sent me in Alaska. 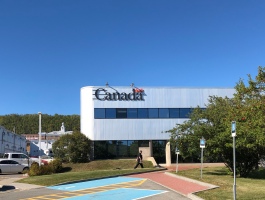 We ate lunch in an old building filled with art on the corner of the main street, snubbing Tim Horton’s across the street. It was a delicious lunch. Cream of leek soup and a shared panini with a flavorful salad. I had a bowl of delicious cafe au lait which I have not had since Ottawa several years ago. Ottawa, the capital of Canada, is in Ontario but is next to Quebec and the restaurants represent both cultures. We wandered down the main street afterwards, stopping in a few stores.

The books store was fascinating, of course, particularly a child’s book with letters to Donald Trump. Unfortunately, everything was in French.  Alas, photo won’t load.

And Yes, except for the blunt motorcycle riders mentioned previously, there are comments, very polite and gentle about what’s going in the U.S. government these days.

We traveled on along the St Lawrence, beautifully blue with the reflected sky and sunshine. Salt water always influences me and I loved the sharp smell of the water. Jim targeted our night stop for New Richmond, but as we drove through the town of Perce, and stopped along the waterfront to photograph  rock formations we decided to spend the night here in a campground along the water, Cape Surprise. The $30 fee was reasonable, with access to a nice washroom and shower area and we set up at the edge of the water and watched the sun set and a full moon rise. The internet was surprisingly good at the camp site.

The sunrise the next morning was equally beautiful. It was most beautiful at 5am, but I could do no more than open an eye to admire it, fully awakening at 7am. Bars of red, orange and gold merging together to lighten the sky that was going to be very blue.Tired last night, we were full of energy and ready to explore this morning. After breakfast, we walked into town after looking at the distance and  uncooperative feet. We walked along the near sidewalk until we reached the new boardwalk that ran by the water. Periodic benches with sayings in French about the water and other things lined the wide wooden path inviting us to rest and not rush the day. JIm’s  plan was to hurry along in order to walk the thin visible path to an island before the tide covered it. Not to be. 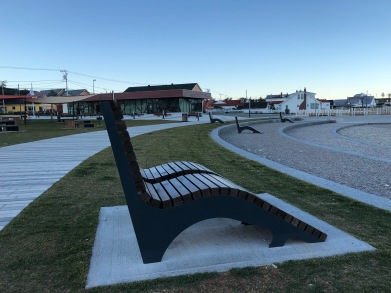 It was a good morning’s stroll with the smell of the salt water and the promise of another beautiful Fall day. As we near the dock, there was a tour boat with people lined up waiting to get on it. Later, we realized the area has whales, seals, birds and other creatures for visitors to enjoy. We read the historical signs along the path of this fishing village and the renovated buildings. At the end of the path, I popped into the National parc du Canada store for a look around. In the meantime Jim spotted a whale surfacing. We started the long way back to the campground, mostly up hill.  We stopped at a French bakery staffed by two young enthusiastic, confident women and enjoyed the best croissants, cafe au last and of course date square and raisin pastry to take back to the Sprinter for later. 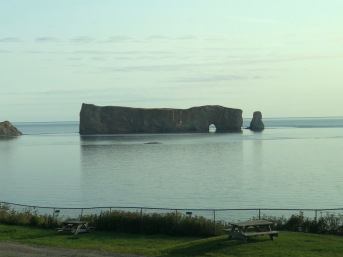 We made it back to the campground and enjoyed a short rest before we continued, loving our unexpected stop.

It is  good to not plan everything so we can be spontaneous when something appealing comes along.

Builder Jim carefully watched workmen assembling a stair railing. Hmmm they are not using screws. Oh, they are using dowels.

We left the beautiful Gaspe Peninsula, truly, memorable. The French and small village fishing culture and of course salt water came together for a wonderful time. Then we entered New Brunswick. Jim planned a speedy trip through the province to spend several days on Prince Edward Island. Alas, photos aren’t loading but imagine….. 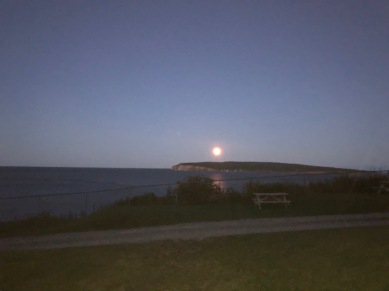 One thought on “Stories along the Way: Gaspe”