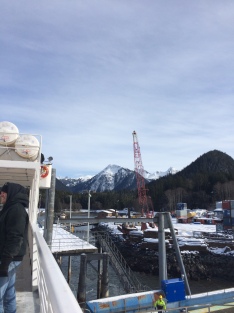 The Sitka ferry dock is seven miles from downtown and, in the Alaska way, the taxi charges “per head.” Downtown is icy, a plague of the freeze/thaw Alaska cycle. Thankfully I have my walking sticks with me. We see the Fearsome Four from the ferry, whose ages I have downgraded to mid-20’s. We’re going to a Lounge,” they say. I think I am a mother figure to them, maybe it’s the traveling pearls or the red silk scarf.

We slip and slide to the Highliner Coffee Shop, a favorite of mine. With purchase I get my own special Internet code for 90 minutes. Jim enjoys a hot chocolate (with whipped cream) and a warmed blueberry coffee cake while I type away silently cursing the lack of high speed Internet in Alaska. I get spoiled in Portland and Salem.

Jim and I taxi back to the ferry just in time.  As the elevator door closes, I see my glove on the ground. A burly arm reaches out and stops the elevator door from closing so I can fetch it. The passenger list now exceeds 300 with the addition of more happy athletes from Sitka and Mt Edgecumbe (which is a respected boarding school for primarily Alaska Natives but open to all). It’s lasagna for dinner, which Jim can never resist and so we find a corner of the cafeteria as the din increases with the new passengers. Juneau is 10 hours away and I can’t imagine the teens will sleep.

On the way back to our cabin, we encounter the Fearsome Four who have commandeered the no-wi-fi-no-sleeping-no-sitting-on-the–tables computer room, sleeping bags already on the floor and the lights out. “We are so tired of kids,” says one of them. Ironically they have left that age group just a few short years ago.

We retire to our “stateroom” for the night as it is the only corner left uninhabited. During the night we hear “call-outs” for Hoonah and Juneau. In the early hours we feel the ferry moving more and we sway in the beds. Squeaking noises appear around the cabin as the strain of the increasing seas rock the ship. Jim makes tea and coffee (a must) carefully pouring the boiling water over the coffee in the strainer. He’s much better at it than I am.

Jim heads to the deck anxious to see what is going on with the weather. He comes back quickly. “You have to see this,” he says. The ferry is eerily quiet now as the teens left in Juneau and we head to front row seats in the forward lounge. The wind whistles through the ship.

The seas are wild with huge waves and whitecaps everywhere. The front windows are covered with sea spray and it is hard to see through them. There are only a handful of passengers in the lounge and everyone is watching the ferry bounce in the violent seas and wind. The ferry’s engines never quaver and it proceeds forward. Suddenly I see a black hooded shape moving outside the windows trying to get to the bow. He has a hard time, buffeted by the waves and turns back. Sometimes a crewmember goes to the bow and so it’s really bad when he can’t get there.   He has hard time pulling the door from the deck open and comes into the lounge. It’s one of the Fearsome Four, the redhead!! “I couldn’t make it,” he says.

A stocky, balding man in a t-shirt sits in one of the chairs casually watching the ferry’s progress and laughing at the Fearsome One. He is obviously a frequent ferry traveler. The stocky man doesn’t change his relaxed position and laughs quietly.

“I keep thinking of Harry Chapin’s Dance Band on the Titanic,” I tell the Fearsome One. “ I realize the blank look means he has no idea what I am talking about. “Your’re too young.” I turn to the stocky man, “but you do.” He nods and smiles. “Ok now you will have it stuck in your head for the whole day,” I tell him.

We pack the “stateroom” consolidating as much as possible to make one trip to The Grey Panther then go back up top to watch the ferry plod forward. There will be a two-hour delay as the captain searches for a different route to avoid the worst of the high seas. Jim and I have both been in smaller boats in high seas and they are not pleasant memories, but it’s fun to watch now. No one panics about the delay—this is Alaska and delays are part of life.

What shall I do with the little bouquet of flowers that has made me so happy in the cabin? I know the young woman in the lounge has too many things to handle with her baby. I walk down the hall and see a dark-haired youngish crew woman seriously studying her clipboard. “Would you like these flowers?” I ask. “You don’t want them?” she asks surprised. “I’m leaving the ferry,” I said “and want to give them to you.” She looked from me to the flowers. “I love them!” she said. “I’ll take them to my cabin.”

Back in the lounge Jim and I sit near the young woman with her baby and we chat in the casual Alaska way. The happy baby has a beautiful quilt and crocheted blanket made by her grandmother and great-grandmother. She is traveling to Haines where her husband is running their heli-ski operation from February to May 1. Until the baby arrived she was his partner. He has not seen his daughter for a month now and she reflects how much harder it is being in total charge of this little life. Their home is in Montana. She admires my black lowtop boots wanting to know the brand. It makes me feel a little younger. She points out a spot on the coast, “We had a house there until last year,” she said. “But it was so hard to get water. When girl friends came to visit and constantly flushed the toilet, I kept thinking, that’s 2.2 gallons!” I decided not to tell her about my stay at the Buddhist temple in Santa Fe that does not allow you to flush unless absolutely necessary. I notice a tiny bottle of nail polish on the window ledge–from the teens. Jim said that there will be a pile of “left-behinds” 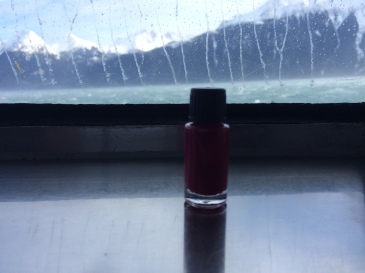 I watch an old man sitting near us. In Sitka while we were at the dock he struggled to the bow and took some photos. I am curious, he’s not a novice. Now I watch as he studies the ferry’s course and goes back to sitting near us in the front row. Finally he puts on his scarf and eventually his worn jacket. I know he has a story but time…….. 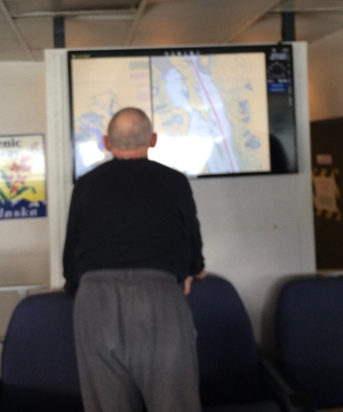 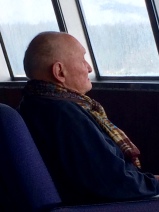 Shore call, time to go and we head down to the car deck and to The Grey Panther. The Fearsome Three hug each other. Surprisingly the black pick-up truck in front of us from Virginia belongs to one of them, while the long-curly haired man climbs into the Sprinter beside us. It has a Utah license plate. We wave goodbye and drive off on to the dock passing a truck with a rocking chair and skis. The Third member, in a white car pulls up with a Texas license plate next to the pickup truck and wait for the Sprinter—not quite ready to say goodbye to their new friends in the Alaska Frontier. That’s just the way Alaska is…….. 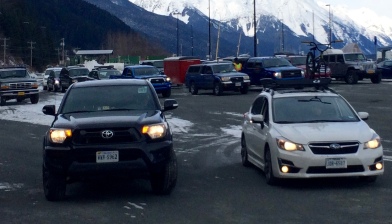 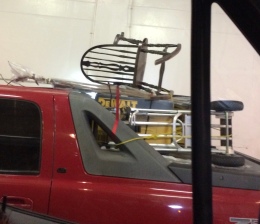 We drive around Haines a little and eat at the Chilkook Bakery and Restaurant that serves Thai food. And has British soap in the washroom. Awww Alaska. We notice a Tiny House for sale

We’re getting close to home now, spending a night in a hotel before we tackle the 1,000 miles and plan to leave early for the 400 mile drive to Tok where the temperature is expected to reach -35 degrees. Then onto Grandview overlooking the Matanuska Glacier to see friends we never get to see often enough. We will reflect on our ferry ride as we absorb it as another wonderful adventure.

The Shooting of Sam McGee

Were you ever out in the Great Alone, when the moon was awful clear,

And the icy mountains hemmed you in with a silence you most could hear;

With only the howl of a timber wolf, and you camped there in the cold,

A half-dead thing in a stark, dead world, clean mad for the muck called gold;

While high overhead, green, yellow and red, the North Lights swept in bars? —

Then you’ve a haunch what the music meant. . . hunger and night and the stars.

One thought on “Stories along the way: Malaspina Ferry Sitka to Haines, Alaska”