Interstate highways are for the tightly scheduled. The destination is the journey. We have certainly done our share of these highways as we hurried here and there. But, now, the journey itself is the destination. I find the Interstates boring and too fast to study roadside scenery passing rapidly. Sometimes we have little choice, but I love the meanderings through the countryside.

It’s late afternoon and we need a place for the night and leave I-40 near Sayre to drive 30 miles north on a two lane road…. the brown winter grass is out of place in 77degrees. Stark tones of brown and black tree trunks give way to ever diminishing bare branches as they twist up to the sky until they became small twigs. The grass lands were farmed until the Dustbowl wiped out the farmers’ crops, then the banks foreclosed on the farms and the banks failed.

Hundreds of tall, white, stork-like windmills turn in the wind. There are so many of them on the roadside prairies and the occasional old wooden windmills looks out of place now… 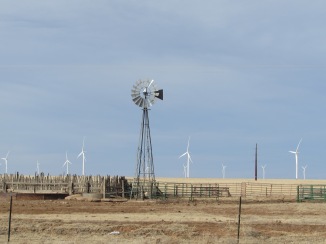 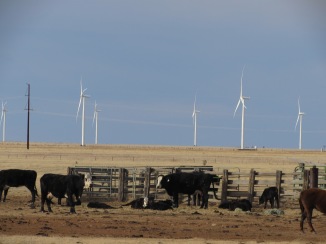 a horse grazes in a dry, brown field…..black Angus cows are stark against the red soil and green winter grass…..a large flock of small birds take flight. So many things to see now and I’m alert and focused at the sights along the way…. Jim wants to get to the campground after a long day of driving and promises better meaderings when we continue the trip tomorrow. We negotiate a deal—I get one turnaround a day to photograph something that went by too fast. ….black cows, walk up a red soil lane, single file; a metal sign shows a cowboy leaning down to kiss a woman on her tiptoe;.a shiny, red pickup truck parked against a worn, grey building; a double wide trailer house still split down the middle though it has been there for some time;…..curved low oil pumps….a lone mailbox in the middle of the road….I wonder how many times it has been hit in bad weather….. …neatly plowed red furrows with tufts of green…rolling hills…the deserted Cheyenne golf club.. 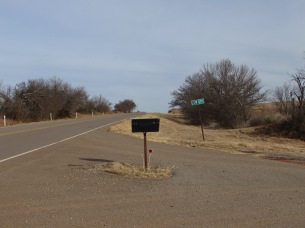 We turn into the Department of Agriculture Grasslands recreation area as the daylight fades. Not sure where to camp, we drive to the end, past the Dead Warrior Creek. A brown cow stands behind a red gate watching us. No one else is here in the nicely kept campground. Jim parks The Grey Panther by the Creek, with our very own ensuite bathroom and double trash bins nearby. It’s still warm and we wander down to the rickety dock on the creek. Silence. Beautiful Silence as the wind pauses. We leave the side door open and eat supper, wandering down to the dock to the sun setting over the water and the almost full moon rises.

As the soft, warm darkness surrounds us, a coyote calls, followed by a flock of geese arguing with each other on a small island in the water. In the Sprinter, we settle for the night….do you hear the owls?, Jim asks. I listen and hear the quieting hoot, hoot. ..and we sleep. 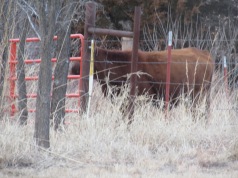 The next morning we watch the sun rise from the big window at our feet and Jim gets up to fix coffee and tea… I wait in bed, he slides open the door and I’m in the middle of an ad of a beautiful bed in middle of the outdoors, but warm and sleepy under the duvet….

It’s time to go and we meander down the road to I 40. Jim stops at designated places. I exercise my turnaround when we drove past a wooden cross on the right. The cross is inscribed at the top “44” down further, “1968-2012. Barbed wire spikes spread out like rays..,in the main pole holds carefully arranged colourful beads in a wire nest. On the ground below surrounded by weeds is a tire rim and a metal object like a large toy jack…. another smaller cross next to it I wonder…..

Down the road a broken down weathered building sits next to a red soil road. I step aside as a red covered tank truck lumbers by. Three red covered bottles lie next to each other in the soil…vines almost cover a window….the remains of a porch… after a hard day of farming did the farmer sink wearily into a chair, breathing in the night air…. did his wife answer the door in her faded housedress?..,the roof of the porch is scalloped….the hand made shingles are falling. 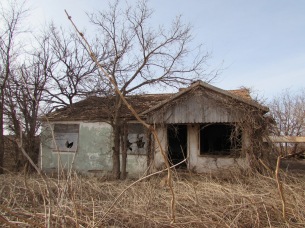 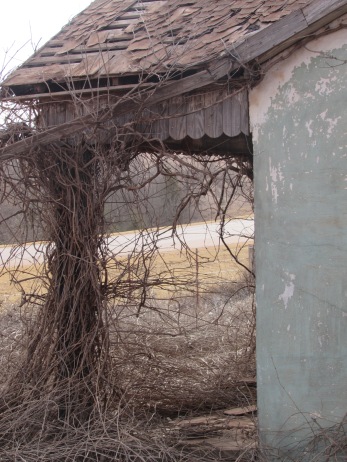 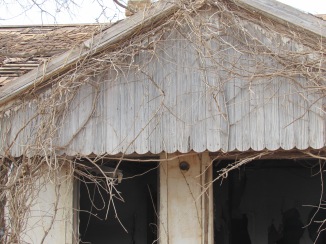 A ‘60’s BSA motorcycle sits on a post above a “Crandalls” sign on top of a faded “beware of dog” sign….broken down weather-worn buildings and deserted farm equipment on a small, nearby hill. Where did their dreams go?

Back on the road we continue to the Interstate driving through the small town of Cheyenne. But then I see a sign… and we turn right instead.

One thought on “Rambling Meanderings I”