BY THE TIME The Grey Panther pulled into Seattle, I had managed to cast on the required stitches for the sweater back. It wasn’t easy, the fine wool was almost the colour of the needles. But I did, in time for the first Seattle knitter…

Kathy, a nurse at Seattle Children’s Hospital hails from Montana. We met while I managed the Cancer Planning Program at t he Alaska Native Tribal Health Consortium many years ago. As sometimes happens, we became fast friends even though we didn’t see each other often. When I had brain surgery to remove a tumor, Kathy sent along a warm boiled wool hat she knitted to keep my head warm… I knew she could knit!

When Jim was getting cancer treatment, Kathy helped him and helped “care” for me by taking me out to an occasional dinner and checking on Jim when I left for my back surgery at the Mayo Clinic. Kathy and Karl were our first and only dinner guests at our tiny cancer house apartment—they brought dinner. Jim and I were still pretty weak and not too mobile so Karl, a physical therapist, quickly cleared and washed the dishes and ran the garbage down the hall before we could protest.

On this trip, we delayed our arrival because of the expected storms and arrived on Monday. After a long day at work, Kathy and Karl made a lovely dinner and the four of us reconnected.

Even though Kathy was tired (she gets up at 4:30 am and catches a van pool from West Seattle to Children’s Hospital) she gamely took on the challenge of the first row, all the time proclaiming she was probably doing it wrong. I assured her that this special sweater, there is no wrong row. Meanwhile Scout and Riley tried vainly to entertain Jim while he read the newspaper. 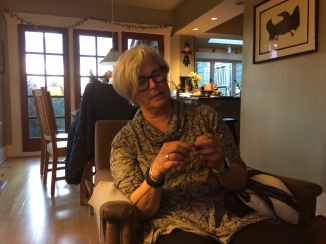 The next morning we braved the Seattle traffic to drive down to Fred Hutchison Cancer Research Center to meet two friends…..both young, energetic, accomplished professional women who also balance family life with young children; they just happen to be knitters. Jim had clearly stated that he had no plans to ever again go to Fred Hutch which is next to the Seattle Cancer Care Alliance building where he received a great many tests and some of his treatment. But because it was Kathy and Heidi…….

Both women,in spite of their busy lives, made themselves available to help during Jim’s treatment. When we could eat again and couldn’t face going down the elevator to the big common kitchen, Heidi would bring us breakfast from the Fred Hutch cafeteria….it was so good. Kathy left off a bag of food from Trader Joes, including frozen Pho, which Jim discovered he loved. Once, when I posted a photo of Jim by the side of the bed holding chocolate on Facebook, Kathy panicked, thinking that’s all he had to eat, picked up her little girls and rushed him a take-out dinner from Whole Foods! Boy, was I embarrassed.

And so, if we hadn’t going through Seattle, if Kathy and Heidi hadn’t seen the FB post about knitting this sweater, we would not have had a short, but wonderful visit with Heidi knitting two rows and Kathy one row. They had to get back to work but promised if the sweater was not done when we came back through in March, they would knit a few more rows…..that’s what friends are for…

One thought on “Jim’s Sweater”