“Welcome home,” said the Canadian border guard as she examined our passports. “Welcome to Canada,” she said to Jim and told him to remove his sunglasses.

I’m always a bit happier when I’m back in Canada and happy to be headed to Whitehorse. It has changed dramatically from when I first came through in 1990—far less eclectic and frontier but still fun to visit

Jim was very tired of driving, but claimed he would be even more tired if he let me drive. It was early evening and the beautiful golden light enhanced the rich brown hides and white antlers of a small elk herd grazing by the side of the road. I checked the “allstays” camping app for a place for The Grey Panther. Several provincial campgrounds, but many closed. I hesitated on Wal-Mart, normally taboo for my snobbish ways. However, a comment praised its off-the-highway location as quiet and safe with free Wifi. I knew there would only be a few campers in October. We selected a quiet spot and put up the makeshift curtains we normally do without. We had a couple of errands and Jim went to Canadian Tire for batteries for the Sprinter keys (“They sell more than tires, Jim”). Two of the three had just failed. Yikes!. Jim started the Wallis stove/heater and I made our first dinner chicken cacciatori on rice. The built in-tile inlaid cabinet with fridge, stove, and sink is wonderful along with the great views, except in parking lots. An unplanned bonus is the warm air blown by the Wallis fan while I cook. We snuggled into our soft, warm bed with Jim quickly falling asleep. With my nerve-damaged painful feet, sleep comes slowly.

Morning and the sun came, the Wallis had kept the temperature around 40 degrees. This is a temperature that would, in previous years, been welcomed to both of us crawling out of a tent in Alaska. But, now, our bones crave more warmth. Next year it will be insulated. 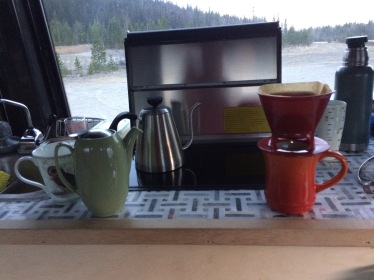 I was ready to prepare tea and coffee on the Wallis, but Jim, the converted American, was ready for Tim Hortons. 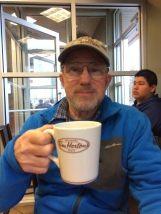 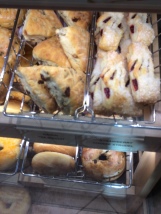 Oldtimer packing up his Toshiba laptop

We drove past the almost empty Starbucks into the crowded TH parking lot. Tim Hortons is more than a fast food restaurant, it is a gathering place. It is the same in any Canadian city. I can’t think of a chain in the U.S. this is similar, not Starbucks, not McDonalds though both are present in Whitehorse.

I have always enjoyed the courtesy of opening and having opened doors for me. The man coming out of the restaurant went a little further, gallantly holding open the inner door with his back foot. Fresh raisin tea biscuits in the case! Breakfast sandwich menu with one side devoted to healthier choices. Brewed half and half for Jim—half coffee, half half and half, hot steeped tea for me with milk. Ahhhhhh. After eating, I sat back with my tea to people watch.

It was a mix of people in the crowded restaurant—First Nations, Indians (from India), white, Chinese, old, young, single, couples, groups, construction workers and well-dressed retirees. With the exception of one parka -clad wizened old timer who sat at his plugged-in ancient Toshiba taking advantage of the free Wifi, most people were just talking to each other in happy, morning voices. Two singles at adjacent tables had phones in hand, but then put them down to chat with each other. A bank official in logo fleece, came in, got his drink and began greeting people as he headed to his table and chatted with former strangers around him. The murmured sound of many voices felt warm and friendly.

We left with raisin tea biscuits in a paper bag and went across the road and railway tracks to the small park to watch the mists rising on the mighty Yukon River– the lifeline for so many frontier people in Canada and Alaska, still providing millions of salmon each year. The air was deliciously crisp and clean. We crunched across the frosty grass to the bank of the swiftly flowing river. It was hard to image that this is the same river that flows 20000 miles to the Yukon Kuskokwin Delta in Alaska where Jim taught school for many years, and then out to the Bering Sea. When we continued driving, we would see the headwater rivers at the start of the Yukon.

Off to the Superstore for a few Canadian supplies. I love new grocery stores; Jim hates most stores and shopping. Sigh. I agreed to meet him in the bakery……the likes of which do not exist in Alaska—even in Anchorage—from plum pudding, stollen and fruitcake for the upcoming holidays to croissants, reasonably-sized single whole wheat hot dog buns, bagels and breads of all types (including a package of square triangle cut crustless white bread ready for tea sandwiches)…..to a grinning Jim with a big box of butter tarts in hand.

One thought on “Home and Whitehorse”