The last night in Sheridan, Debbie went out to feed her horse in the dark. She came back in because she spotted a sound (which she demonstrated) that turned out to be a Pygmy owl. Greg, Jim and Debbie went out into the night. Not only did the see the baby owl, but also the parent (night walking is to treacherous for me). It’s the little things.

We headed into the Big Horn mountains after leaving Sheridan. They put on their most spectacular weather show. Hail! Thunderstorms! Wind! But we were cozy in The Grey Panther. The sun came out and it was soooo green with beautiful wild flowers including lupine, miniature sunflowers, black-eyed susans, forget me nots and many others. Nature always puts on the very best show.

Between Powell and Cody we passed another dark time in U.S. History. It was the Japanese relocation camp at Heart Mountain. Unfortunately, the Interpretive Center was closed that day. When I worked at the Alaska SeaLife Center, a colleague’s uncle had been interned there. In her house was an exquisite Japanese painting—with the prominent barb wire and camp inside.

We entered Cody. I longed to walk the main street but Jim zipped along through town and we found a great campsite once again, on the Buffalo Bill Lake. We were tired but I walked a couple of loops with my sticks taking in the clean air, water, mountains and cotton tail rabbits snacking on wild flowers. A nightmare avoided when a dog-chasing rabbit was saved by the screech of the brakes.Jim watched a weasel carrying a dinner mouse.

Jim, still recovering from the motorcycle trip, fell asleep at 8pm and I quickly followed. A big sky from our bed provided the perfect lullaby. A deep perfect sleep only interrupted by our mutual leg cramps and my shooting pain. Ironic that we both suffered nerve damage at relatively the same time! It was a reminder of the time not so long ago when we were so weak. I didn’t like that memory.

But, as usual, in the morning we were rested and cheerful and started on our way charmed by the many buffalo-like rocks along the way laughing as one of us came up with a new pun or joke about “tea” particularly as Jim likes to bring me my REAL cup of tea.

There was no chance of getting close to Old Faithful or Biscuit Basin. The area was simply packed and we were tired…..again. In 2015, there were 4,000,000 visits to Yellowstone. As far as 2016, I think they were all visiting that day. These places were off the main road—easily accessible. Jim remembered a less accessible site. We drove in to Fire Lake Drive. Almost no one was there. A truck from Texas rolled by “Your ole state is prettier than this or are you just renting your rig.” The Alaska license plates and the Sprinter always gets comments and Jim turns to Sprinter guide. We enjoyed lots of geysers and steaming vents at our uncrowded leisure. Jim was focused on being first to find the man who disappeared and assumed to fall in one of the geysers.

We left the park since all the campgrounds were full. Once again we were lucky. We found a small national campground off the main road. $3.50 for the night with our Senior pass. It was basic but beautiful. Several couples were walking around the park hand in hand. I looked at them wistfully, knowing our legs would not support us at the end of the day. Jim surprised me when he said, “I wish my feet were better so we could walk around—but we did quite a bit of walking today holding hands.” I was touched. I didn’t think he had noticed. I gave him dinner in bed and he was asleep at 8:30. He was ever so tired.

We awoke to rain, but the Sprinter is so cozy. The motorcycle trailer we tow is a little restrictive and it reminds us why we like just the Sprinter—it does not limit us. Jim added steps in Sheridan and grudgingly admitted that they make it easier to get in. We stick to two lane roads as much as possible. Interstates are boring. It’s the little sites that make the trip—old and new barns, buffalo, horses, cows, goats, sheep, elk, antelope, deer, old downtowns.

We zoomed through mine defunct White Sulfur Springs but I managed to notice an interesting store around the corner “Red Ant Pants—work clothes for women”. Later we saw a poster in Chocteau about a concert they sponsored. If I were traveling with a girl friend, it would be a very slooowwww trip. Girl friends are so good at stopping and encouraging shopping.

We continued driving on the road with thick, tall spruce trees on each side with very little traffic. A wanderer’s dream. Streams run merrily alongside the road. We pass a lone motorcycle, a log truck, “mixed architecture” in the mountain town including personal “gated bridges” across the roadside stream leading to the house. Old mine shafts, ghostly railroad stations tell the town’s story. We pass the Montana Fiddle Camp just starting and the spacious Garden Pet Cemetery. In Chocteau we stop at an ice cream parlor and walk around the small museum, examining the “shepherder’s wagon—a small covered wagon that he used to live in while tending sheep in the hills. 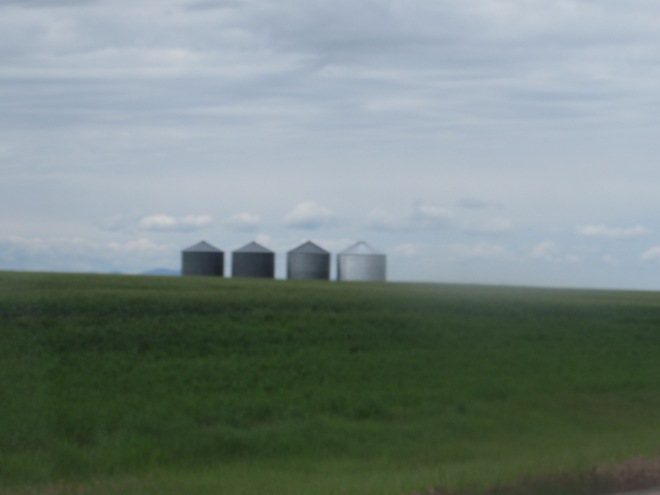 We were on reservation lands as we headed to Canada near Glacier National Park, wondering where we would spend the night. We had just decided to drive to Canada for the night when I spotted a very small official looking sign “Park ranger. Campground 5 miles.” Why not? We drove down the ever narrowing gravel road as horses moved to the side. “No potable water” a sign said. We drove on and on, curious as the mountains rose in front of us. A sign “Glacier National Park” welcomed us. Finally we reached a tiny campground in the shade of the mountain. Jim maneuvered the Sprinter/trailer expertly into place and the smell of forest greeted us when we stepped out. The only other people there were a group of young people, part of the Montana Conservation Corp, building a fence and one other “paid customer” a couple with a tent. Heavy bear warning signs and food must go into a provided container. We did a bit of a wander and saw a beautiful patch of wild strawberries just blossoming. I remembered 26 years ago on my way to Alaska camping in Glacier in an overflow tent area in August and waking up to wild strawberries. The next morning we headed to Canada, pleased with our little adventure. 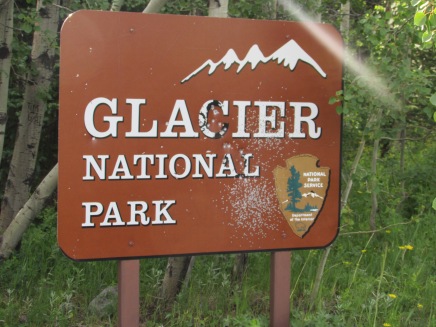 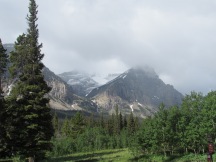 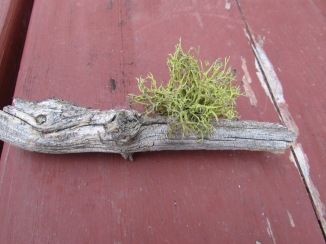 I must admit I was glad to be back home in Canada, so comforting especially the great tea at Tim Horton’s. It was time for a free hotel stay as I had enough points for two nights at a Marriott Residence Inn. I had been not feeling well for a day or so and realized I had a full blown UTI. I was directed to a clinic in a “Superstore”. Saw the doctor, got a prescription, the sample was sent off to a lab because I must self-cath all for a charge of $85US. No complaints from me. Unfortunately I was not feeling well enough to go downtown to the museum which I was looking forward to. We had decided to bypass the Bashed in Head Buffalo Hunting Unesco site enroute to Calgary.

Rested and reluctantly drinking more fluids, we are off this morning to Banff, Jasper and beyond.—no time for careful editing….must get on the road