THE RETURN OF THE GREY PANTHER

Last week I met up with the recovering motorcycle rider, Jim O’Neill, in Sheridan WY. Jim picked me up at the Billings MT airport.

And there she was, The Grey Panther, just waiting to have her engine revved up to take us on our next adventure. Why, she was almost purring!! We needed to pick up the trailer for his motorcycle. He had a good chat with the great guy he bought it from. I sat in the Sprinter watching a couple of goats wondering around on a nearby roof.

He was riding to the West Coast with friends to spread the ashes of a long time friend. There was only one problem. He was a Harley Rider. I had to have a stern talk with The Grey Panther because she would be hauling a trailer with a Harley logo and a comic picture of Poncho Villa for a short time only. Maybe I could put a red circle around and a red diagonal mark through it? Tape a BMW motorcycle logo over it? We headed to Sheridan, WY to happily spend time with former Alaskan friends who have become even dearer as we find time to really get to know each other.

I had made a few last minute mail order purchases, a step and a screen door for the sliding side door that Jim will install. Oops, I forgot to tell him. I was very pleased working with www.Eurocamping.com. They worked hard to get the items here to us in WY. Surprisingly they would have been more expensive to ship to Alaska. HA! Not so pleased with Home Depot where we must order the dry toilet refills. Ordered them some time ago and won’t be here until Monday. It’s ok, we are happy to continue our visit and the heat wave of high 90’s should break tomorrow. And the shock of no mosquitoes is an added bonus.

While getting a good rest and good visit we decided to drive an hour north to go to Little Big Horn/Custer’s Last Stand. Jim had been there twice, but is a history junkie. We left the offending trailer behind.

Rolling hills with scattered white markers where soldiers had fallen graced the area. I learned that the Indian scouts had warned Custer that there were too many Indians for them to war against. But the advice was ignored. There are so many books written about the battle, from many angles and were available in the National Park Service bookstore.

We went on a tour bus ride sponsored by one of the local tribes through the monument that includes a great deal of reservation land. This was grudgingly accepted by me as I would have preferred to walk the whole area, but…..reality. Working hard on what I CAN do, not what I CAN’T do. Interestingly, the Native American tour guide talked about this time in American history where there was a depression, unemployment was at 25% and many migrants from Europe. Many of them entered the military.

The national cemetery included veterans as far back as the Spanish-American war and a special area for the Indian scouts the military employed. There was even a special “military horse” cemetery.

This is a cowboy town. A real one. Ok there are also quite a few multimillionaire weekend cowboys, too. And there are 50 philanthropic foundations with average assets of $500k. They are very generous to the town. This includes a local high-end restaurant that sponsors a different charity each Monday. All proceeds from that evening go to the charity. There is a thriving downtown. Beautiful bronze sculptures appear frequently along the sidewalk. Main Street is shut off for Third Thursday for different events including music, farmer’s markets, etc.

One highlight of the town is Shiptons. To show how unique it is, Jim, who does not like stores, has gone there almost every day. They have items including horse equipment, guns, chicks, farming, cooking, clothing and….just about everything. I bought an Amish baking cookbook. Jim bought guy stuff. Everyone is so friendly from customers to sales staff—that you don’t have to hunt for. I enjoyed two little girls with their grandmother looking at the toys—a John Deere tractor. But they still tried to get Barbie to sit on the seat. 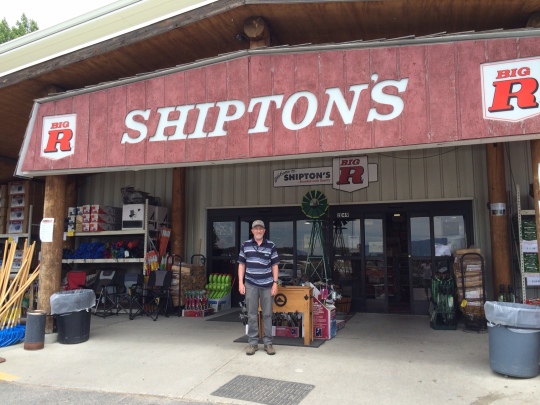 Thunderstorms and high winds rolling in from the surrounding mountains were a forgotten weather event. Coupled with the 95+ degree heat it was an interesting weather event. Thankfully it cooled down at night.

After great pizza at the local joint, we drove to the monument for Capt. William Fetterman commemorating the Fetterman Fight of 1866. The real joy was the journey. We left Sheridan, drove through Story and into the foothills of the Big Horn Mountains as sunset approached. Verdant green hills as smooth as the finest carpet with contrasting foliage surrounded us; antelope and deer were everywhere. Awe. We got out at the monument, but, once again, the pink sky juxtaposed on various cloud configurations with dusk creeping over the land was enchanting. 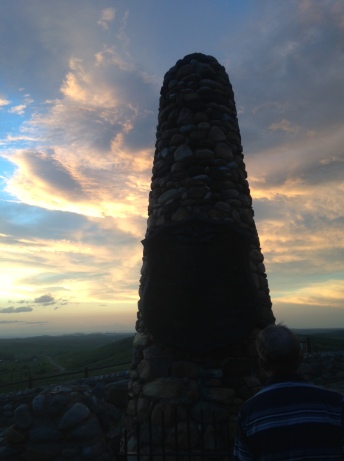 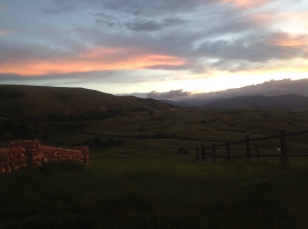 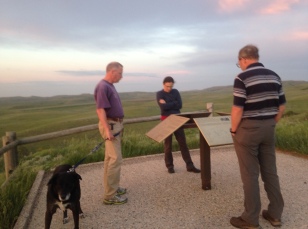 Parting is such sweet sorrow….W. Shakespeare

Today we say goodbye to friends, including Pi the horse, Maggie the dog and Tess the cat, with whom we have eaten, laughed, reminisced and explored their corner of WY and head for Yellowstone. Of course I made a couple of ikebanas in thanks. They will hold the vessels and kazens for my next visit. We’re on the road again! 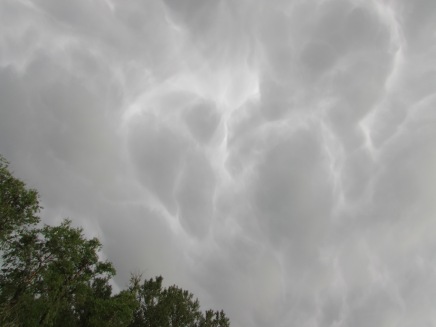 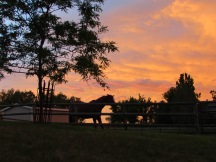