Jim O’Neill is good about calling or texting before he starts the next leg of his motorcycle trip. When I didn’t hear from him by 9:30am ADT, I started to worry, my fertile imagination took flight or in this case roared down the highway. I texted him.

He soon called. He was in Sheridan WY, resting in the shade. The last 150 miles were tough. He said his motorcycle riding days are about over. That the motorcycle will spend most of its time in the trailer. He dumped the bike on gravel with him on it. A big burly guy stopped to help him right the bike and told him he had done it many times. Jim wasn’t hurt. I’m sure the Good Samaritan/fellow biker didn’t know he was helping a 65 year old man who had just ridden 1,300 miles. A man who, just a little over a year ago had survived a bone marrow transplant and five long months of treatment for a rare combination of stage 4 two kinds of lymphoma!!!

And who knows, after a few months away from this important finish line…..after lots of rest, story telling, and the easy job of driving TheGreyPanther Sprinter back to Alaska……. 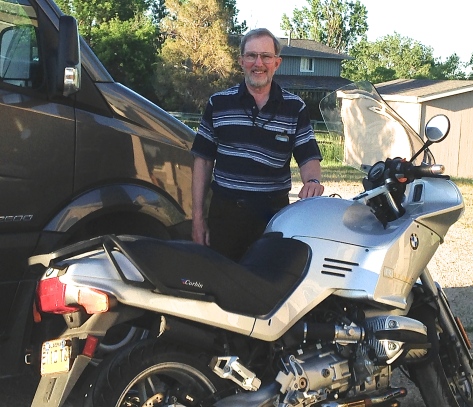