Part of the joy of travel is learning. Not having my brain stuffed with work issues, there is extra space. Retirement is good. Our last stop in the Petrified Forest National Park was The Desert Inn. It had been completely renovated by Civilian Conservation Corp (CCC) workers in the 1930’s. (More about them later) However, the architect was a woman, Mary Colter, unusual in those days. She was from Minnesota, the daughter of Irish immigrants. She designed many structures in the southwest particularly in the National Parks. She was ahead of her time by incorporating elements of the local environment in her work. She also identified local Native American artists and featured them in her buildings. As we traveled it was good to learn new things about her work. One of her most famous works was La Posada hotel and gardens on the railroad line in Winslow, AZ. It was designed as a Spanish hacienda, filled with beautiful furniture and made with natural materials. Unfortunately it was decommissioned by the railroad, antiques sold off and made into railroad offices and then fell into ruin. It was The Last Great Railroad Hotel built in 1929 by the Santa Fe Railway for the Fred Harvey Company.

The hotel was bought and renovated by Allan Affeldt. He was the leader of the International Peace Walk sometime ago. One of the walkers was renown artist, Tina Mion, and they married. Her art, which is both political and reflective, is hung in a gallery in the hotel. The hotel resurrected Winslow (ok, maybe The Eagles helped) and has received numerous awards and is considered “one of the best” and favorite of travelers by publications such as Conde Nast Traveler. It offers no discounts and is reasonably priced….and is fully booked except for January and February. Amtrak still stops to drop off passengers at the hotel door. The beautiful gardens are also being refreshed. Affeldt’s political beliefs are apparent in a small poster in each room—they participate in a global project wherein hotels send leftover soap to a company where it is remade into bars and sent to third world countries along with CDC advisories on how washing hands reduces infections.

Due to the major presence of medical issues during most of Jim’s and my relationship, we haven’t spent time and money on entertainment. Having dinner at La Posada was only second time we have had a very special dinner out. And it was special. From the moment we checked into the hotel, admiring its furnishings and our room with bare wooden floor and antiques until we checked out the next day, it was magical. Each room has a theme; ours was Jane Russell (Jim loved it) with a short bio of the entertainer along with a photo. John Wayne was next door and Shirley Temple across the hall. Trains did go by during the night but the sound was muted and wistful with no whistles.

We dressed for dinner and had the chief’s specialty “Wild Wild.” Quail, elk, and a chili made of buffalo and venison. The presentation was beautiful and the wait staff perfect. We lingered and lingered until it was time to go. The next morning we had breakfast in The Turquoise Room again and spent time touring the hotel and the gardens including the antiques and the art work. I bought some prints as we checked out. A spur of the moment decision turned into a special memory to be savored in good times and bad. 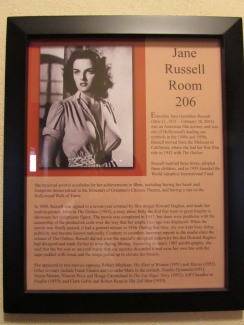 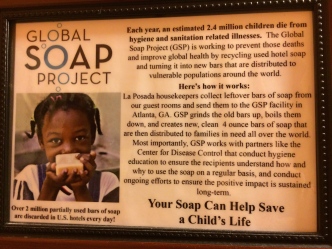 We stopped by the Meteor Crater and drove into the park—which is managed by a private company. The meteor hit the earth about 50,000 years ago. It was used by NASA for moon landing training. At one time, mining efforts were attempted. To me, one of the most touching pieces of information that was posted was about a long time scientist who worked at the site, Dr. Eugene Shoemaker. He never fulfilled his dream of going to the moon. And so, when he died, family and friends launched a rocket with his ashes that was sent to the moon.

We continued our trip, heading to the Grand Canyon, camping in the Kaibab National Forest. Jim positioned the Sprinter so that we could watch both the sunrise and sunset. When he opened the side door in the morning the tantalizing smell of Juniper filled the van.

Jim and I had been to the Grand Canyon in previous lives but wanted to go together. Maybe the 1991 move “Grand Canyon” had a little something to do with it. Things had changed since I was there 25 years ago. It was three months after I had moved to Alaska and was in Phoenix for a meeting. My friend and I decided to check into an old log hotel and walk to the bottom of the canyon the next day. We did and then continued on to the Colorado River and walked back up the canyon. Today there are warnings everywhere that you must get an overnight permit if you go down to the River. In addition, there are many more buildings for lodging. However, the Canyon is unchanged, as grand and breath taking as ever!! Again we learned more about Mary Colter when we went to the Watchtower that she designed.

We had to get a hotel room for one night as I needed medical supplies delivered and “General Delivery” didn’t work. They went to Flagstaff and were waiting to be “picked up”. Why don’t people use the US Post office? Anything out of the norm and Fed EX and UPS don’t know what to do. Admittedly, a room with a full bathroom is always nice and the family-owned Red Feather Lodge, outside the park was one of the cleanest I have seen…..and they had my package from the Mayo Clinic waiting.

I’m behind and we must leave the hotel in Bryce with Internet. Stay tuned.

2 thoughts on “Learning through travel”